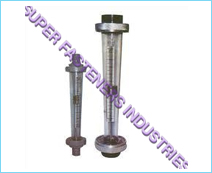 A Rota meter is a device that measures the flow rate of fluid in a closed tube. It belongs to a class of meters called variable area meters, which measure flow rate by allowing the cross-sectional area the fluid travels through, to vary, causing a measurable effect. A Rota meter consists of a tapered tube, typically made of glass with a 'float', made either of anodized aluminum or a ceramic, actually a shaped weight, inside that is pushed up by the drag force of the flow and pulled down by gravity.

A Rota meter requires no external power or fuel, it uses only the inherent properties of the fluid, along with gravity, to measure flow rate A Rota meter is also a relatively simple device that can be mass manufactured out of cheap materials, allowing for its widespread use Since the area of the flow passage increases as the float moves up the tube, the scale is approximately linear Clear glass is used this is highly resistant to thermal shock and chemical action.